“If you were to visit the English countryside 15 years ago, you would have found nine times as many small farms as you do today – and twice as many different farms in general….”

Elise Wach, a PhD student working on the Potentials for agroecology and food sovereignty in the Scottish uplands, wrote an article in the Guardian warning about the potential for shortsighted policy to usher in a new era of environmentally destructive “megafarms”.

For years, farmers across the UK have received subsidies on a per-hectare basis without any requirement to use that land to actually produce food as part of the European Common Agricultural Policy. This means that wealthy owners of large estates have been given large sums of taxpayer money simply for owning land, without necessarily farming it. It’s a system that has long been criticised – and rightly so.

With Brexit looming, the UK government’s Department for Environment, Farming and Rural Affairs (Defra) has recently introduced an Agriculture Bill and draft policies. It proposes paying landowners for delivering environmental benefits such as improved air quality or habitats for wildlife, an approach that has been understandably praised by environmental groups.

But, while this all sounds rather green, there is little evidence that the government will support, let alone require, farms to integrate ecology with food production. It appears that landowners will receive support for either increasing productivity, or improving the environment – but not necessarily both at the same time. This either-or approach could usher in a new era of environmentally destructive “megafarms”.

March of the megafarms

There has been a rapid increase in the number of these farms in recent years – for both animals and crops. Britain’s first intensive poultry farm was approved in 2003 – and there are now more than 1,400 permits for these operations, the largest of which can “process” more than a million chickens per week. Similarly, the number of high-intensity horticultureoperations is increasing, with government grants supporting efforts to produce vegetables without soil. 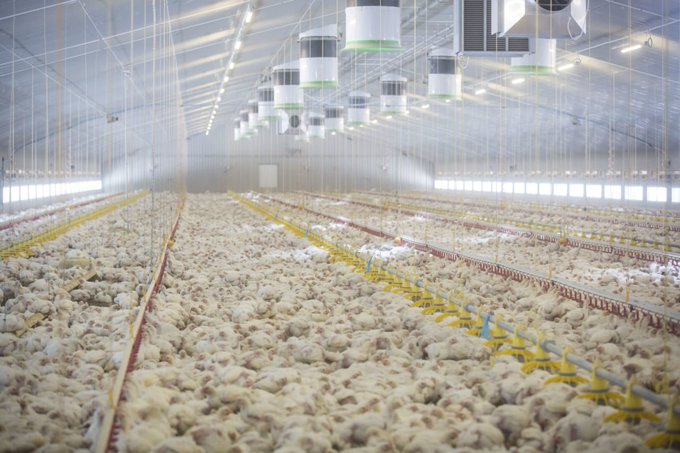 Will de Freitas@Will_deF – Reading up on ‘megafarms’. This one in Hertfordshire processes 1.3m chickens per year (photo: Rob Stothard)11:50 AM – Oct 5, 2018 See Will de Freitas’s other Tweets

Megafarms have been responsible for pollution to rivers and waterways. Animals are often fed with imported corn and soya, the majority of which is genetically modified to withstand high doses of the controversial herbicide glyphosate. Industrial-scale horticulture operations tend to rely on imported minerals for plant feed, use significant amounts of energy for heating and produce a low diversity of crops.

Research shows that conservation areas cannot make up for the environmental damage of intensive farms. Even if megafarms were interspersed within vast landscapes of parks and woodlands, it still wouldn’t help.

But given the government’s intention to improve the environment, why would this happen?

Will land be for farming or for investment?

As area-based payments are phased out, Defra expects that many farmers will leave the sector. The assumption is that as farmers exit, land will be freed up for new entrants. But across the UK farm land is now seen as a safe shelter for wealth – recommended by estate agents as a “tax-efficient” investment. This contributes to the high and rising cost of land, arguably more than land-based subsidies.

Without addressing this, it is likely that, as farmers leave, land will be bought by investors and by large farm businesses, continuing the current trend of consolidation and rising farmland prices. Young farmers and other new entrants might be desperately needed to reverse the UK’s declining farming population, but they will continue to struggle to get hold of land.

Hard to eat by selling food

One of the main reasons why megafarms have become popular and smaller farms have gone under is because farms only receive a small fraction of the retail value of food. Combined with low agricultural commodity prices, it is nearly impossible for farmers to earn a living from the food they produce.

The Agriculture Bill does propose some new powers to collect data about the supply chain, a move which should mean more transparency but which is unlikely to result in farmers receiving significantly more money. If landowners are paid for protecting the environment, but receive little for food production, there is a good chance that farm land will be used for conservation, not farming.

Until the UK can restructure its supply chains, it needs to keep supporting farmers to produce food. The alternative is for the country to increase its already high reliance on imports – but research has shown this could undermine food security and safety.

To improve productivity, Defra has emphasised automation, drones and “precision farming” in its consultation paper. Yet these technologies favour uniformity and are best suited to high-intensity, large-scale farms that focus on producing one or two foods and use lots of resources.

Low-tech practices such as growing different crops in the same space (poly-cropping) or agroforestry can increase yields of diverse foods and regenerate soil, all while minimising harmful inputs. This could help support existing farms which have struggled with long-term soil deterioration and feel locked-in to using certain agro-chemicals. But these approaches are knowledge-intensive and take time to implement. Without support for them it is likely that farmers will continue to either leave the business or intensify.

The shift towards megafarms is not inevitable or necessary. Defra has included some measures to support ecological and human-scale farming, such as a nod towards reducing pesticide use, and a support for County Farms which can help new entrants. However, much more is needed to ensure that farming and the environment are truly integrated.

This article is republished from The Conversation under a Creative Commons license. Read the original article.